I fell in love with this yarn at Knit City last year, and with another Knit City pending, I realized I better work my way through what I bought last year! I just love the crazy neons and how you can get a single stitch in one colour. It kind of reminds me of the crazy variegated acrylics you can get, but this is hand-painted loveliness. I hate knitting with acrylic, so this is as close as I’d ever get. 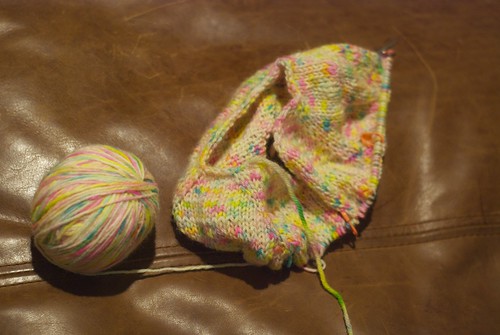 I started to knit a Purl Soho placket sweater. (Must add that I’m not convinced the pictures currently featured on Ravelry do it justice – it’s a very cute pattern and when I made it, the collar didn’t flare) But I had been a bit too casual about swatching it, and it turned out much larger than expected. Miss M announced she did not want another sweater, so I tore it out to make it for some more willing creature. The yarn, a Blue Leicester DK, knits up more like a worsted. I inadvertently blocked part of it by leaving it under the sprinkler, so I can confirm it puffs up nicely too. Anyway, I chose a worsted pattern instead, Abate, which has been in my favourites for ages. I bought three skeins so I am hoping I have enough left over to make some socks or a hat for ME.