Sometimes people ask me what it’s like to have four kids, and all I can say is that it is completely insane. The kind of person who should have four kids should thrive on chaosÂ and also be completely organized. I am not sure I am that person.

P does not know any other children who have three siblings. He actually could not think of a friend at his school who had more than one sibling. I am sure there are swaths of the country where four or more kids is no big deal, but in my urban neighbourhood the cheese stands alone.

My oldest twoÂ are very self-sufficient, which makes things easier. I remember thinking my oldest child was a tough toddler. He was a colicky baby, but now that I’ve had the experience of three more, I realise he was a breeze.Â My secondÂ child is a fairly intense child and has multiple tantrums a day, sometimes over very innocuous things like “you smiled” or “you didn’t remember where that photograph was taken” or “you can’t tell me the plot of a film that I saw with someone else and that you’ve never seen.” She is also very sweet and loving and creative. She thrives one-on-one, so we try to carve those opportunities for her – but they are mostly snatched – a grocery trip here or a coffee date there.

B is a more intense version of her older sister. She is the kind of toddler who needs to keep busy and who is always asking for her coat and shoesÂ to be put on in the hopes you will get her outside.Â She is also much more physical and adventurous than either of her older siblings were, which is very cute but also frightening. She is very demanding. Perhaps that’s not a personality trait, but just a survival instinct when you have three siblings.

C and B could not be more different, as C is super easy-going. She has a huge smile for everyone she knows, unlike her twin who is invariably suspicious. But CÂ is also very physically dependent and has a limited tolerance for her various seating/walking/standing contraptions and an even more limited tolerance for hanging on the floor, so she spends a lot of time in our arms. Which then, understandably, makes B annoyed and more demanding.

I have no idea what the point of this post is, except that I feel like a lot of people, when they ask if you have four children, expect you to say that it’s fantastic in every way. It is fantastic in many ways. It is also very hard at times. There are many, many things I enjoyed doing before I had children which I have no time to do. I started exercising again recently and I realized the only way to do it is to set my alarm before my kids get up, and they get up early! It won’t always be this hard. I’m sure once we get a few years further along it will be much easier. But there are aÂ crazyÂ few years before you get there, and we are right in the thick of them.Â I guess it’s all relative though – I thought have two kids was hard. And it was at the time.

Tonight, for the first time in many weeks, he let me read him a bedtime story. 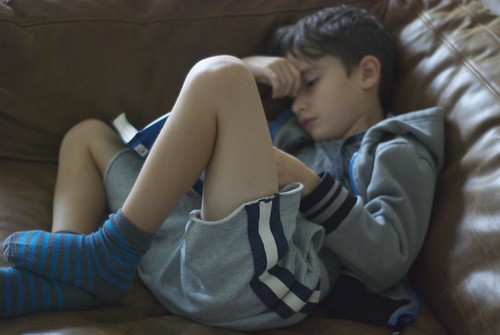 I’ve been off knitting for a while – hard to deal with bulky wool when it’s 30 degrees. But I have a new project perfect for summer. The pop blanket! Wee little colourful squares that are fun to knit, knit with Noro so you never quite know what colour the next square will be. 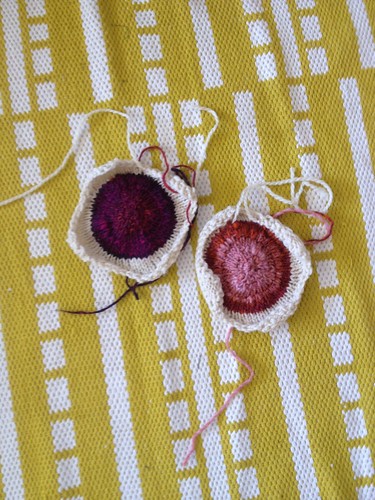 Okay, these two look kind of like boobs, but imagine more! In blanket shape!

What else is up? The garden is growing. 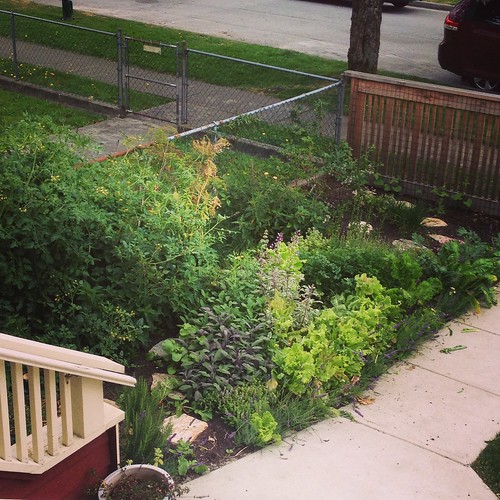 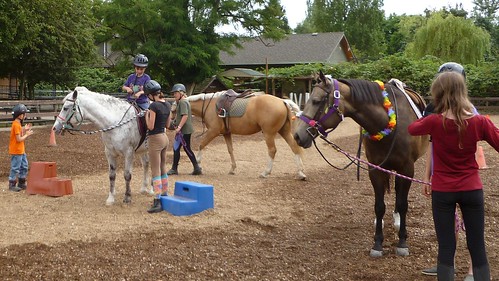 C and I had fun in Stanley Park. Not sure why my hair looks so ’70s unwashed here, but since the Coco-monster looks cute I will post anyway. 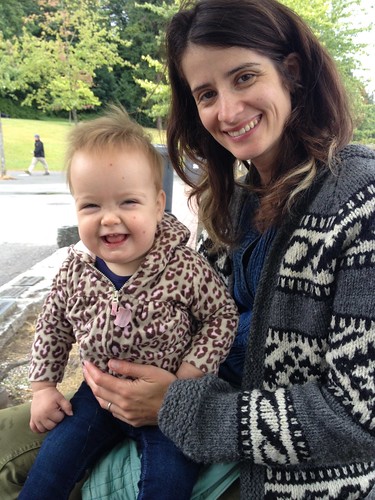 B learned to climb and torment her sister. Darn, thought I had a better picture of her riding in my new front-bike seat, but I can’t find it. 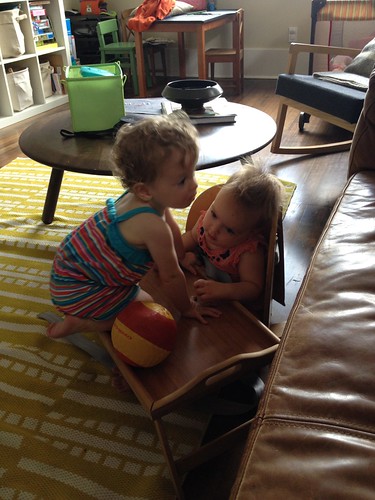 And since it’s late and Flickr is being finicky as usual, more later!

A few weeks ago, while we were at C’s physiotherapy session M wrapped her arms around me and said “Why are C and B different?” I couldn’t think of a quick answer, but M is nothing if not persistent. “Why are they different????? WHY???” I can’t remember what I muttered, but I didn’t do a very good job since we were in a session with three therapists, and two cranky babies. When I tried to return to it later that evening she seemed to have forgotten.

I’ve been open with the kids about C’s brain injury. We tell them that part of her brain that helps her move got hurt. It’s possible that her cognition or vision or other things are affected as well, but we don’t know that, and so we haven’t gone there yet. To me she seems as intellectually aware as any other baby, and that’s how I treat her and wish her to be treated. Sometimes I wonder if I am too open, as P happily blathers about it with random strangers. Other times it comes up in a nice way – like we watch a show called Signing Time. I explained to the kids that the lead little girl’s sister also has an “owie” on her brain like C, and that she appears in lots of the segments. M was very pleased by that. Sometimes I wonder if “owie” is an appropriate way to describe it, but it is an injury and I’m not sure it’s useful to get overly technical.

Last night as M was brushing her teeth, and I was putting one of the twins down, I heard her ask “When will C’s owie get better?” Then I overheard a very calm, patient and lovely explanation of neuroplasticity, aimed at a four-year old. The broken part won’t heal over. Other parts of her brain may try to take over what the injured part would have done, but they might not do quite as good a job. P came up from the bath spluttering “NEVER?” “But won’t skin grow over it?” asked M. “How big is the part that’s hurt? Show me on my hands.” The truth is we don’t really know, and J never saw the scans, but I think he went with “thumb.” Probably more, but thumb is good.

“You mean she might never run as fast as I do?” Probably not. “Even whens she’s SIX?” We hope she’ll walk by then, but maybe she’ll need a walker, or even a wheelchair if we’re going far. But she might be very good at other things. Then later, M putting on her pyjamas, she was singing, “But I want a wheelchair. I want to be the one in the wheelchair.”

These are the questions adults don’t ask – but kids get right to the heart of the matter. These are surreal conversations, and they are difficult ones. But they are very healing in their own way.

I wonder if future generations will look back on Pinterest and think we all had impeccably organised homes and ate lavish delicious meals with home churned butter. I have a confession – I love the sew, but there are many, many imperfections in what I do. Same with my knitting. And I’m quite okay with that. All that sewing/knitting time? It’s my selfish time. It’s my thinking time. I don’t do it because I feel this obligation to have the perfect product. It’s more like meditation.

The food Pinterests are the ones that really baffle me. Do people with families really have time to dip a hundred strawberries in yoghurt and freeze them for a snack? They don’t do what I do and plunk the unwashed carton in front of their children? If the kids want yoghurt, can’t they just eat it with a spoon?

I do like to cook when I have time. But I never have time, so it’s mostly the same, simple, homely meals again and again. And yes, I mean homely, not homey. Lunch is even worse. Someone is always crying at lunch time, and the big kids are often at school or preschool. The word lunch is probably a misnomer since it’s often three by the time I eat. I am always hopeful that there will be some miracle and the babies will nap at the same time. And to be fair, they sometimes do but I always overestimate how much time I have, so I spend a few minutes on the ‘Net, pick up 47 pieces of Lego, and by then one of them is up again and I’m limited to food options that can be eaten with one hand, or prepared with a foot on the bouncy chair. I should make a list of what I’ve eaten for lunch in the past week. Monday: Mini-cupcakes – four to be exact. Tuesday: Almonds and Beef jerky. Wednesday: I think I forgot to eat lunch that day. Thursday: Kraft dinner my mother made me. Friday: Goat cheese and crackers which wouldn’t be so bad except I also inhaled half a box of Peak Freans. At least the almonds and beef jerky is kind of Paleo, right?